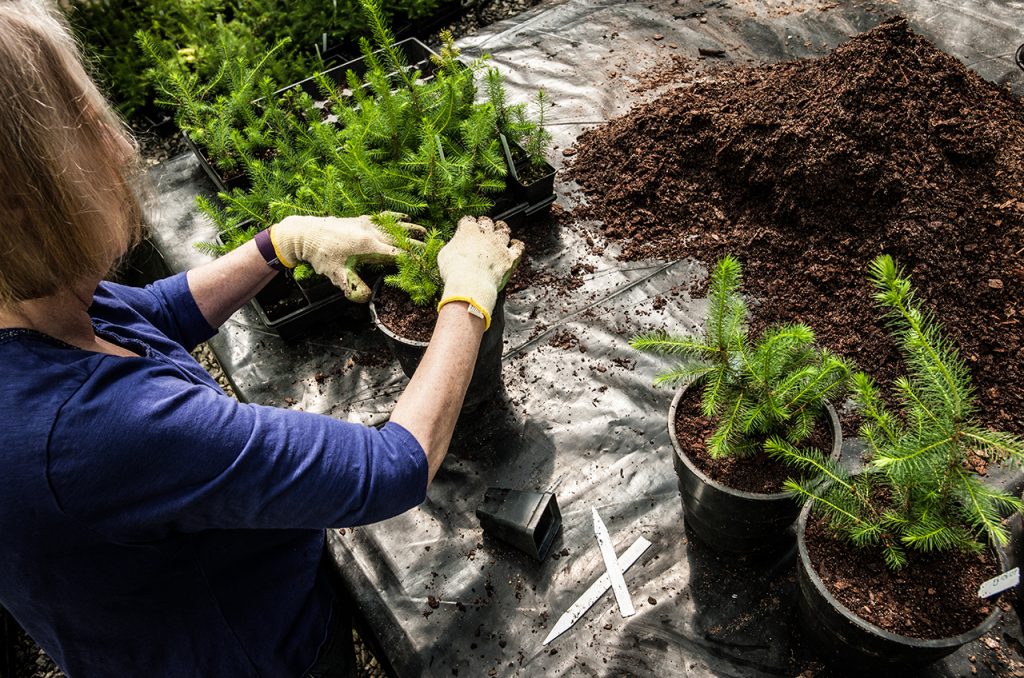 In two large hoop houses, high above the lakes of Western North Carolina, researchers and volunteers are growing tens of thousands of red spruce trees in an effort to restore the high elevation spruce-fir forests of the Southern Appalachian Mountains.

These high-elevation forests in the past were devastated by uncontrolled logging and wildfires. Today, Southern Highlands Reserve is working in partnership with the U.S. Forest Service, U.S. Fish and Wildlife Service, the North Carolina Wildlife Commission, and the Nature Conservancy to increase its production of red spruce from 10,000 to 50,000 trees.

The goal is to replenish the high-elevation forest areas in North Carolina, Tennessee, and Virginia, where the red spruce canopy density has been depleted.

“Humans have the power – right now – to create, preserve, restore, or destroy,” said Kelly Holdbrooks, Executive Director of Southern Highlands Reserve. “I do not think most humans truly realize the impact we are causing to the Earth and how connected we are to all other living things.”

Holdbrooks added, “My hope is that we leave this planet a better place.”

The 120-acre Southern Highlands Reserve was created to be a “native plant arboretum and research center dedicated to sustaining the natural ecosystems of the Blue Ridge Mountains.” The reserve welcomes visitors and offers tours of its gardens and unique landscape.

The North American Land Trust (NALT) has worked with the reserve since 2000 to achieve their dream of protecting the land from future residential and commercial development with several conservation easements. NALT also protects more than 1,200 acres in nearby Lake Toxaway from development.

“We are in a race to protect unique ecosystems like the Southern Appalachian spruce forests,” said NALT President Steven Carter. “NALT is proud to work with Southern Highlands Reserve and our other partners to protect and restore these valuable natural resources.”

“Spruce restoration is absolutely critical to return these forests to their natural state and conserve the wildlife that call these forests home,” said Sue Cameron, a wildlife biologist with the US Fish and Wildlife Service.

From the 1880s to the 1930s, the spruce-fir forests were logged extensively and left vulnerable to catastrophic wildfires. SASRI says the fires not only killed the trees but burned the organic soils needed for red spruce germination. Nearly 100 years later, the spruce-fir forests still have not recovered from the uncontrolled logging and wildfires.

“Ultimately, we want to expand these forests and increase resiliency in the face of a changing climate,” Cameron said. “This is an incredibly special and unique ecosystem that is worthy of these efforts.”

SASRI partners realized that Southern Highlands Reserve, which lies at an elevation 4,500-feet, was a good spot to grow red spruce. So the reserve’s staff and volunteers began collecting red spruce seeds and growing them in the hoop houses.

Holdbrooks said she is honored to be restoring these magnificent trees and forests, which will live on long past our lifetimes.

“It’s amazing how this little, non-profit garden became the forefront of red spruce restoration,” she said.

To reach its goal of growing 50,000 red spruce trees, Southern Highlands Reserve is launching a capital campaign to build a new greenhouse that would double the size of its current 20-year-old hoop houses. The new facility will include updated technology that would help to better care for and grow young trees.For more information, visit the reserve’s website.